The legalization of cannabis is a victory, but it is not enough.  The battle is not over until every person who has been punished for cannabis-related crimes, which are now legal, are freed and exonerated.  The battle is not over until every person, family, and community is paid reparations for the destruction they have been subjected to by the Injustice System.  Yes, let us celebrate this victory, but we do not stop now and we will not stop until justice is in the hands of the People.
On January 1st, 2018, the recreational sale, use, and possession of cannabis became legal in the state of California.  This victory is another step forward in a long journey to overturning the "War on Drugs," a campaign which put a disproportionate number of our black and brown brothers, sisters, and kin behind bars and continues to oppress our communities.

Yes, this legislation is a victory, a victory that should be celebrated, but this is just a step in our mission to return justice and power back to the People.  A bill that lets us purchase cannabis but doesn't exonerate every single person who did so before is NOT ENOUGH.  A bill that lets us grow our own cannabis but does not pay reparations to the communities who were ripped apart by the "drug war" is NOT ENOUGH. 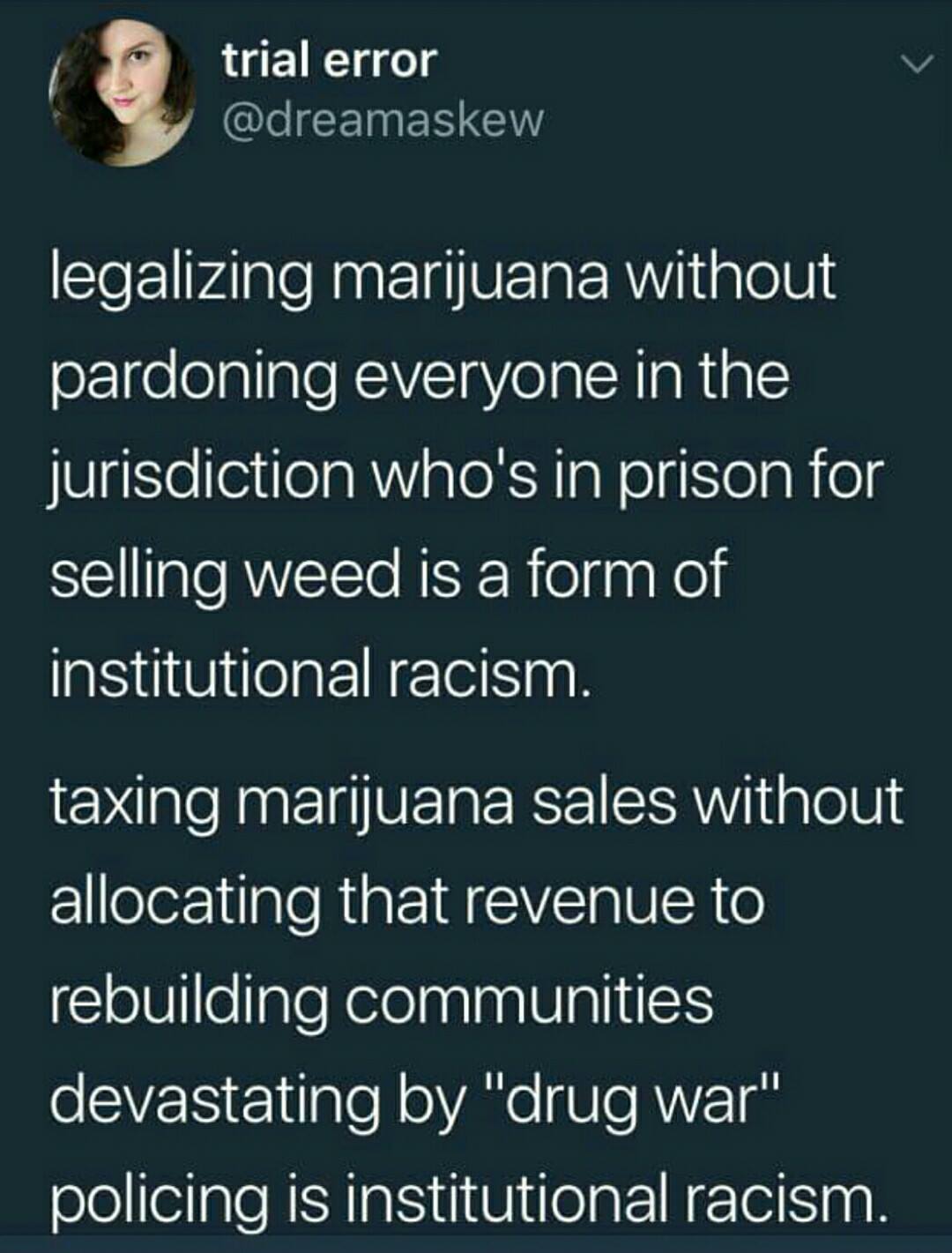 Mad credit to Twitter user @dreamaskew for saying what must be said!!!
The "drug war" used "law & order" as a dog whistle to put our black and brown folx behind bars.  The "drug war" tore apart already vulnerable communities to fill the pockets of the prison industrial complex.  The 13th Amendment didn't make slavery illegal -- it codified it into law, making it legal to enslave those who have been incarcerated.  And it has never been about political parties: Reagan, HW, Clinton, W, Obama, and now Trump.  Each administration has fueled or remained complicit in the perpetuation of a system which profits off the back of our incarcerated kin.   It has never been about politics, or public safety, or health.  The "drug war" was and remains about PROFITS.

And now as states, one-by-one, legalize the use of cannabis we have to remember our mission.  We aren't JUST fighting for the legalization of cannabis.  We are fighting for and we are demanding a social order which puts the PEOPLE over PROFITS!

That cannot and will not happen until every person punished by laws which are now void are exonerated and until every person and community affected by these policies is paid the reparations that will never be enough to make up for the damage this false "drug war" has done.

It does not matter if our politicians sound "woke" about all this (let's be real, most don't).  We know that the only reason to keep innocent people in jail is the same reason the Confederacy rose up....because the system values the profits earned on the backs of slaves more than it values the hearts and souls and humanity of our kin.  And, now they have given us a bribe.  The legalization of cannabis is a sweet, sweet deal.

IT IS NOT ENOUGH!

The legalization of cannabis is an accomplishment worth celebrating!  But it is one step and one step only on the greater journey in returning justice and power to the people.  Cannabis promises to raise billions of dollars in taxes for state governments.  Where is that money going?  Is it going to end up in fat pockets or is it going to be used to rebuild the communities the "drug war" attacked?  That is our next step.  A cannabis policy that puts the people over the profits is a policy that puts money back into the communities that the old cannabis laws worked to destroy.  We do not stop until then and we will not stop after!

Let us fight for the freedom of our kin locked behind bars, locked out of employment by checkboxes, locked out of housing, locked away from their families for offenses that are now legal.  Let us fight to ensure a cannabis policy that puts the PEOPLE over the PROFITS, that exonerates those wrongly punished and rebuilds communities in need.

Much love to all of you,
Charles Marks
P.O.P.S.D.